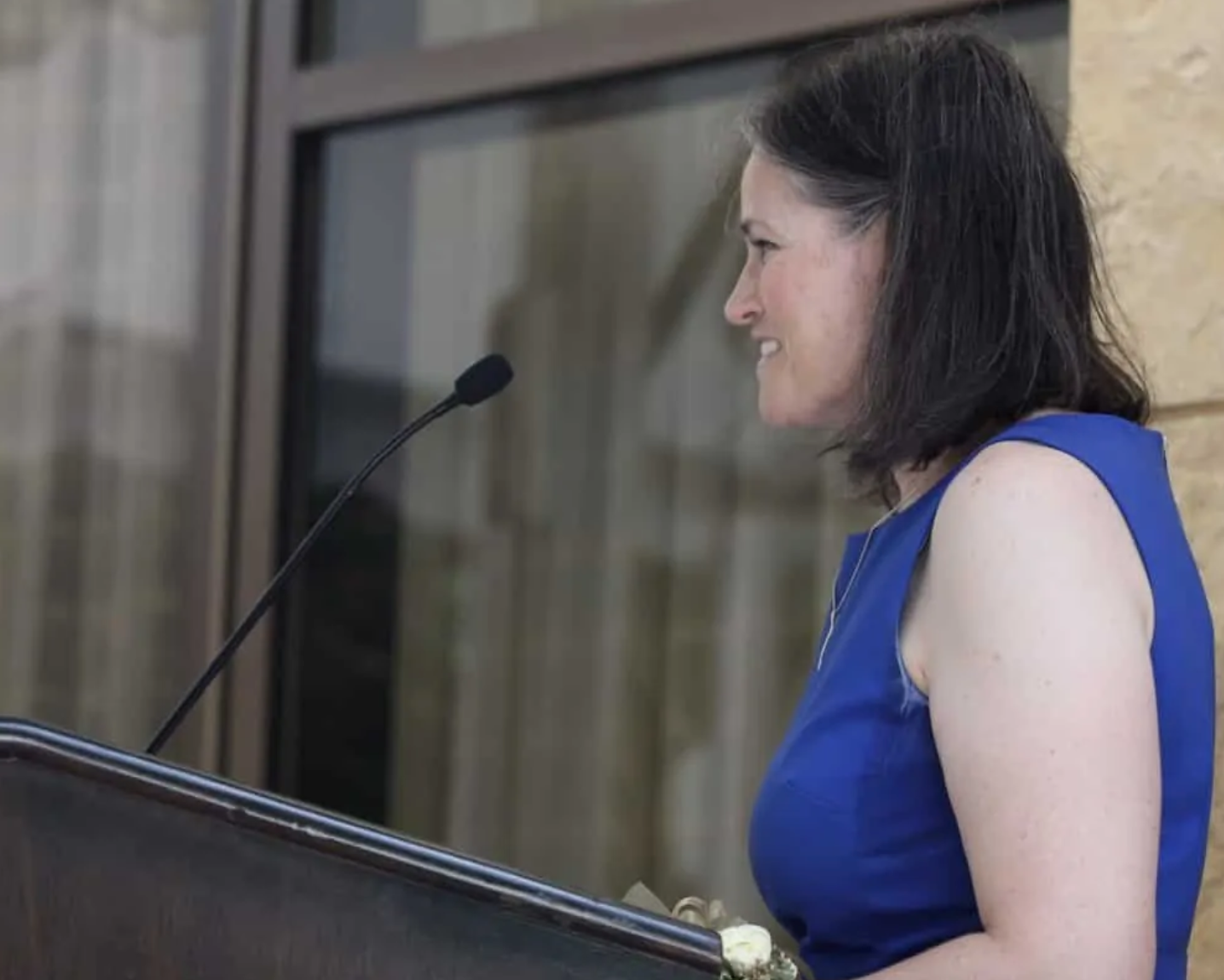 The new 2020 Burroughs Wellcome Fund North Carolina Teacher of the Year is Maureen Stover, who teaches science at Cumberland International Early College High School in Cumberland County Schools. She was named during a ceremony at The Umstead Hotel in Cary on Friday.

The state has recognized “Teachers of the Year” since 1970, according to a press release from the state Department of Public Instruction. Stover was one of nine regional teachers of the year, all of whom were in contention for the North Carolina teacher of the year spot.

“As an educator, I don’t see problems, but rather I see opportunities for solutions,” Stover said during her acceptance speech. “I am humbled to be a teacher leader as we continue to find creative ways to improve the educational opportunities for every child in North Carolina regardless of zip code.”

Here are the other regional teachers of the year.

Stover is a former intelligence officer with the U.S. Air Force, according to the press release, and started teaching 11 years ago in Florida through the federal Troops to Teachers program. At Cumberland International Early College, she has taught biology, earth and environmental science, and AVID for the last three years, in addition to holding leadership roles, according to the press release.

In an interview after the ceremony, Stover talked about COVID-19 and some of the issues she is passionate about.

She said that no matter what happens this school year, teachers “are going to step up and take that challenge on.”

“I think for all teachers right now there is a little bit of anxiety. But I think what all teachers demonstrated in March when we initially went to the remote learning model is that we are very creative and we are very good at figuring out ways to reach our students,” she said.

As teacher of the year, Stover said she hopes to advocate more for teaching social and emotional learning to students. She said schools do a good job of teaching reading, writing, and other content, but she worries teachers sometimes “lose focus” on helping students with social-emotional needs.

She also said that one issue she hopes to see get more traction this coming year is movement on the long-running Leandro case. Leandro started in 1994 when families from five low-wealth counties sued the state, claiming North Carolina was not providing their kids with the same educational opportunities as students in higher-income districts. Late last year, an independent consultant released a report with recommendations on how the state can meet its obligation to ensure a quality education for every child. More recently, the parties in the case sent to the court a plan to meet the short-term goals of that report.

“I would really like to see the implementation of the recommendations from the Leandro report,” she said. “I am excited that we’re going to begin putting them into action in the next coming school year.”

The teacher of the year event was far different than it has been in the past, when people packed into a room to hear the announcement. This year, the announcement celebration was held outside, with only 25 people attending due to concern about COVID-19. The ceremony had been postponed twice, and was originally supposed to have 140 attendees.

Before announcing the teacher of the year, state Superintendent Mark Johnson spoke, saying that he is used to shaking hands and hugging, and wished he could do that with each of the regional teachers of the year. He said he knows that everyone is having to deal with the new reality of life under COVID-19.

“That’s why we’re so lucky to have each and every one of you,” he said to the regional teachers of the year. “We’ve been through so much this year. And this is still the United States of America. This is still the only country in the world to have a dream named after it.”

Prior to the announcement, Mariah Morris, the 2019 teacher of the year, told the 2020 regional teachers of the year about what her role has meant for her.

“One of the first things I did as teacher of the year was board an airplane, sign a consent form — I don’t know why I did that — and jump out of a perfectly good operable airplane with my cohort. But what a metaphor for what this year has been,” she said, adding: “That airplane is my classroom and it’s everything I knew to be true in education.”

She went on to say that the teacher of the year and the regional finalists should use their positions to advocate for the teachers and students in North Carolina.

She said that when she and the other regional teachers of the year from 2019 went skydiving, they all chose a subject they were passionate about and had T-shirts made for the jump.

“If I remember back, I think that what I was jumping for is more important than ever, and that is for the state of North Carolina to commit to fully fund our schools,” Morris said.

Stover will travel the state as an ambassador for teachers and will serve as an advisor on the State Board of Education for two years. She will also receive the following, according to the press release.

“During her second year of service she will receive the use of a new vehicle, leased from Flow Automotive, LLC, the opportunity to attend a seminar at the NC Center for the Advancement of Teaching (NCCAT), a mobile device from Lenovo valued at approximately $1,600, an engraved vase, a one-time cash award of $7,500, a trip to the National Teacher of the Year Conference and International Space Camp, and the opportunity to travel abroad through an endowment sponsored by Go Global NC,” the press release stated.